Johnnie Hill June 3, 2021 MMA loans Comments Off on 57% of UAE’s workforce would not survive financially for three months with severe illness 2 Views 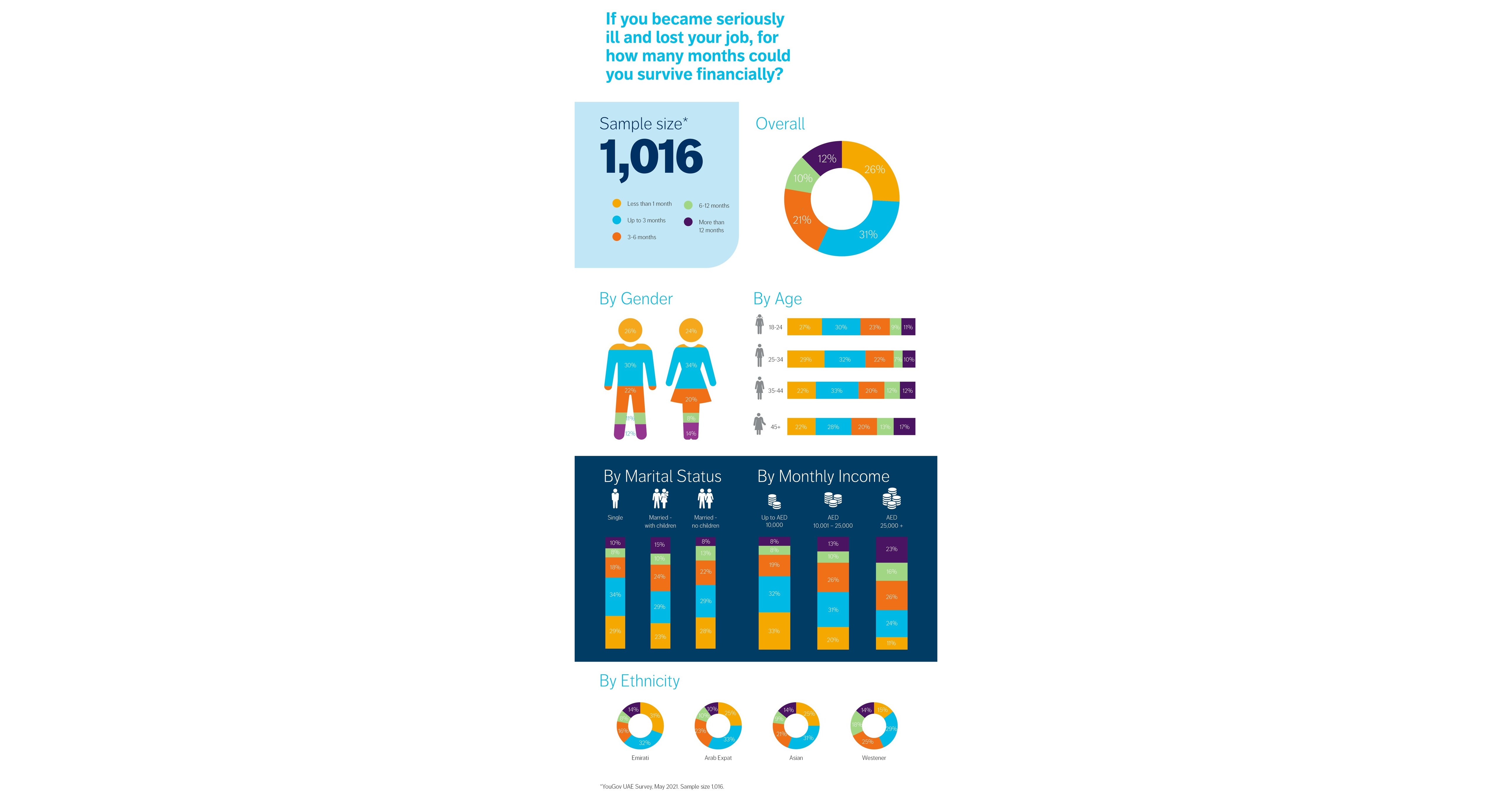 Results of a Financial Survival Survey commissioned by Amis Prévoyance Internationale (FPIL), a global provider of protection, savings and investment solutions operating out of the United Arab Emirates, Isle of Man and across Asia, reveals that 57% of the UAE’s workforce is not financially prepared enough to survive three months in the event of a serious illness causing them to quit their jobs. Surprisingly, more than a quarter of those polled say they would not survive even a month.

The survey which received responses from more than 1,000 UAE employees across all segments of gender, age, income, nationality, emirate and relationship status, “highlights the lack of preparing average UAE employees for serious illness – especially the impact a debilitating illness can have on income and financial survival, ”says Stuart shilcock, Head of sales, Middle East at Friends Provident International.

Why worry about a serious illness?

Statistically, employees are more likely to be diagnosed with a critical illness than to die during their working life. A 40-year-old non-smoker is more than four times more likely to be diagnosed with a serious illness than to die before the age of 65 (Source: Pacific Life Re March 2018). A life-changing illness has a significant impact on the ability to work, reducing – or stopping altogether – the ability to earn money.

And, as the results of the FPIL survey show, “unfortunately not all employees in the UAE are prepared to survive financially if they cannot work,” says Shilcock.

While women were slightly more convinced than men that they could survive financially for three months in the event of serious illness and job loss, only 12% of men and 14% of women believed they could survive a full 12 months. Somewhat counterintuitively, older employees, in the 45 and over age bracket, “who one would expect to be better prepared financially or at least to have more savings, were less confident of. survive the first six months than younger employees, “observes Shilcock. That said, older employees were the largest group, 17%, of those who thought they could survive for up to 12 months. This indicates “a slightly higher level of financial preparedness among a still very small segment of older employees,” says Shilcock. No matter how you look at the data, the vast majority of employees of all ages were still unprepared for serious illness.

More than two-thirds of Emirati, Arab expatriate and Asian workers did not believe they could survive financially for three months if they fell ill and lost their jobs. Western employees were even less confident of surviving financially “with a total of 71% believing that they couldn’t last three months if they got sick and couldn’t work,” says Shilcock. These figures are particularly worrying considering that expatriates in the UAE do not enjoy the same statutory benefits that exist in many of their home countries. In Dubai, for example, there is very little statutory sickness benefit and no free schooling.

Coupled with other demographic data, the picture depicted by the FPIL survey is not improving.

Singles were more confident that they could survive financially for three months than married employees or married employees with children. Although more confident than the other groups, given that 66% of singles believed they could not survive financially for three months if they got sick and lost their job, this shows “the high level of financial unpreparedness, even among singles with few dependents, ”says Shilcock.

The overwhelming message from this data is that, regardless of gender, age, income, nationality, emirate or relationship status, “critical illness coverage is the responsible thing to do if you live and work in the UAE, especially in these very uncertain times, ”advises Shilcock.

Following the recent introduction of the UAE Insurance Authority’s BOD-49 regulation, promoting fee and product transparency “FPIL recently relaunched its critical illness coverage to be fully compliant with BOD49, ”reports Shilcock, who added:“ Our critical illness plan is available to CCG expats because it is a counseling-driven solution, it is only available through regulated financial advisers. “

What is critical illness coverage?

Offered as part of a protection product, critical illness coverage promises financial payout in the event of a diagnosis of critical illness during the life of the product. This means you can focus on recovering, rather than worrying about whether you can pay your bills. In fact, unlike medical coverage, critical illness coverage is specially designed to cover things like rent, mortgage payments, utility bills, loans and debts, food, tuition, alterations. of the house (addition of stairlifts, handrails, etc.) and many other expenses of daily living. are not covered by life or medical insurance policies.

However, what critical illness coverage shares with life insurance is that a very small premium buys a lot of income replacement coverage in case getting sick means having to quit your job.

This press release is not an advertisement intended for consumers and is intended only for use by journalists and financial intermediaries.